Hair loss is a very popular ailment that affects both women and men. Sometimes it even occurs in children. For people who struggle with it, it is often a cause of complexes and discomfort. In the case of a very high intensity of symptoms, it may even lead to a gradual withdrawal from social contacts. In our clinic, we deal with a very extensive diagnosis of hair loss and its treatment, which is selected individually for the patient. Our specialists analyze the problem very carefully, look for its cause and propose appropriate solutions, each time taking care to maintain the patient’s comfort at the highest level. 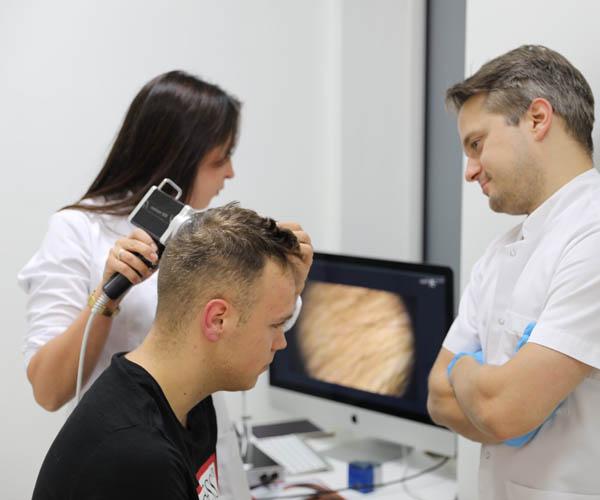 Diagnostics is the most important in the treatment of hair loss. Find out what the cause of the excessive hair loss is. For this purpose, a visual inspection of the scalp, pull tests, light microscopy and other tests are performed.

Trichoscopy often turns out to be very helpful in determining the source of the problem, as it allows you to see the scalp at multiple magnification and the possibility to analyze the condition and phase in which the hair shaft is located. A detailed interview is also carried out with the patient, as there may be many reasons for the prolapse.

These include, among others, issues related to genetic burden and various types of alopecia, nutrient deficiencies in the diet, too much stress or scalp irritation, which can often be related to the disease.

Often the cause of hair loss is caused by hormonal disorders and changes, the use of certain medications or fungal and seborrhoea-related diseases.

Therefore, the hair loss treatment focuses on getting rid of the cause of the problem in the first place, stopping hair loss and on supporting therapy, e.g. new hair growth or strengthening the scalp.

The patient’s hair care, diet, medications and other diseases that may have an impact on this state of affairs are also monitored.

Among the indications for the treatment of hair loss are visible hair thinning, the presence of bald patches on the head, bends or a gradual shift of the hairline. You should also go to a medical consultation when you notice a loss of more than 100 per day. However, this symptom is quite imprecise because it is difficult to determine exactly how many hairs fall out during the day.

Also, seasonal hair loss and hair loss during the period of naturally occurring hormonal changes throughout life may be a reason for visiting a trichologist. It is also worth starting treatment when you are struggling with seborrhea, greasy scales or weak and brittle hair. If you suspect that your hair is falling out excessively, it is not worth waiting for the symptoms to get worse. You should get tested as soon as possible, because early diagnosed alopecia is much easier to treat than in advanced stages. You can then implement preventive measures that will prevent excessive hair loss and strengthen it, and look for the cause of the loss, even before baldness is visible on the head.

The doctor decides whether there are any contraindications for this treatment. They are completely different with different hair loss treatments. The lowest risk of contraindications is associated with treatments such as mesotherapy, carboxytherapy and platelet-rich plasma. Mesotherapy is not performed in people who are forced to take anticoagulants or whose skin is infected. Contraindication to carboxytherapy are cardiovascular complaints, phlebitis or unregulated problems with blood pressure. Plasma treatments are not performed during menstruation, or when the person who wants to undergo the treatment is pregnant, has dermatosis or is in the process of skin infection.

Preparations with minoxidil are not used in the case of active diseases and damage to the continuity of tissues in the places where it was to be applied. It is also forbidden during pregnancy. Glucocorticosteroids are quite a large group of drugs, they can be used, provided that they are properly matched to the specificity of the problem and the specific patient. However, in relation to them, a fairly wide catalog of side effects has been constructed, so it is not recommended to use them in people who already experience ailments that may appear after taking medications. The contraindication to the use of finasterides is usually being a woman of childbearing age. It must not be used during pregnancy and should not be chosen for the treatment of children. That is why it is used mainly in men, and in the case of women, alternatives with a similar effect are sought, the use of which will not be associated with excessive risk, and will help to get rid of the problem. Transplants, on the other hand, will not be performed by people with general poor health, scalp diseases or problems with blood clotting. Before commencing such a procedure, the Patient must undergo a checkup in order to qualify for the procedure.

The course of the treatment

The course of therapy in excessive hair loss depends on a specific case and is very individual. Each treatment begins with a consultation with a doctor, an interview, a visual inspection of the hair and scalp and, optionally, a referral to appropriate tests that will help to make an accurate diagnosis.

For the treatment to be effective, the cause of the prolapse must be found and eliminated, which is why extensive diagnostics is extremely important. Then the doctor selects the appropriate drugs and proposes a solution to the problem. He may propose one of the methods mentioned or move towards less popular treatments.

Often, very good results are achieved by combining several treatments with each other or the simultaneous use of preparations applied to the skin and orally. Most of the treatment methods used in excessive hair loss are non-invasive, do not require any special preparation from the Patients, or a convalescence period.

There are many methods of treating hair loss. Some of them can be combined with others, others should be practiced on their own. Most of them are aimed at different causes of the problem, hence the principles of their operation are different. The most popular methods of treating this troublesome ailment include:

Treatments with platelet-rich plasma – which are a hypoallergenic method, safe even for allergy sufferers. Treatments with the use of plasma improve the density and condition of the hair, and the loss is reduced.
Mesotherapy – in particular needle or micro-needle. It involves controlled damage to the scalp and the application of preparations to its deeper layers, which are designed to stop hair loss and strengthen the skin.
Carboxytherapy – which significantly improves circulation and microcirculation, thanks to which it is possible to better nourish and strengthen the hair follicles.
The use of preparations with minoxidil – externally to the scalp. It gives very good results in the case of androgenetic alopecia.
Glucocorticosteroids – used when the underlying cause of hair loss or alopecia is inflammatory or immune-related. They are currently the most powerful drugs with immunosuppressive and antiallergic properties. However, their long-term use is not recommended due to the side effects that may occur.
Taking finasterides or other medications against hair loss – which are good when the causes of hair loss and alopecia can be caused by genetic factors.
Hair transplant – which is a good solution when the hair follicles have been damaged and the effects of the disease become irreversible with the help of other treatments. During the transplant, it is possible to move the hair follicles from other parts of the body or from the occipital part to the place where hair is missing.

Hair loss treatment in a nutshell

Hair loss treatment can be very quick and simple, or complicated and long-lasting, as it all depends on the etiology of the problem.

The doctor selects treatment methods individually for a specific case. There are no universal solutions that will work for every patient.

The treatment takes into account the health condition, age and sex of the person reporting the problem, as well as the medications taken on a regular basis and potentially contraindications.

The catalog of hair loss treatment methods is so wide that there are no cases where absolutely nothing can be done.

Treatment results can be monitored on an ongoing basis using advanced diagnostic techniques.

The effects of treating hair loss, although they depend on the chosen method and individual case, are usually satisfactory. Some guarantee immediate, visible improvement right after the procedure. In the case of others, we wait up to several months for the effects. However, it is worth remembering that the treatment of hair loss should not be abandoned as soon as the problem is resolved. It is a good idea to have regular check-ups later on as this is a condition that tends to recur.

Inspection of the scalp and hair every few months will also allow for the early detection of scalp diseases or various types of alopecia. When visiting a doctor, it is also worth consulting your current skin and hair care plan as well as the cosmetics used for this purpose, which may also cause excessive hair loss. Proper care, diet and a healthy lifestyle are of great importance in the case of susceptibility to many diseases and accelerated hair loss and brittleness. A holistic approach to the problem will allow you to enjoy a beautiful and thick hairstyle for a long time, regardless of age and gender.

Hair porosity – do a quick test

Proper hair care is a well-known topic that each of us knows a lot about. However, it often happens that a basic hair care is not enough and the hair…

What to do to make hair grow faster?

Hair gives you confidence and allows you to define your style. Therefore, especially women dream about beautiful, healthy and shiny hair, that allows them to create unique hairstyles. Especially the…

Hair care is not only about using good quality shampoos and conditioners, but also using hair masks. Homemade hair masks can work wonders, even when they are made out of…
See more articles

Stay up to date!

Do not missout on any upcoming promotions and interesting information about new cosmetics. No spam!